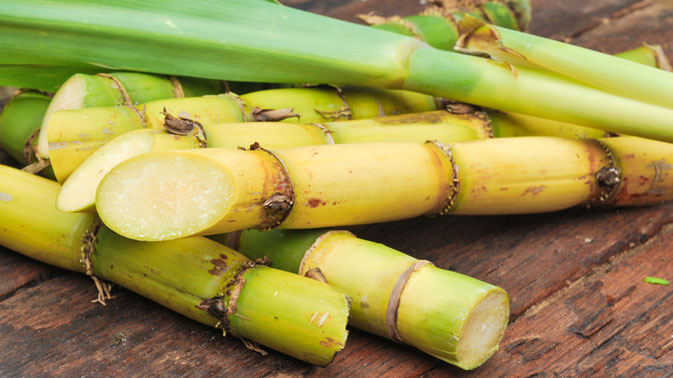 The sweet juice has been bringing to joy to people for 2500 years.

The sugar cane plant gradually made its way from East Asia to the Middle East and onwards to Europe and America. And in all these places the sugar cane juice is pressed, before being crystallised into raw sugar (mainly sucrose) through a multi-stage boiling process. The raw sugar has a distinct brown colour and a slight malty taste. It loses the malty flavour and turns a lighter colour during the subsequent refining process.

Freshly pressed and refrigerated, sugar cane juice is a very popular soft drink in its native countries of Cuba and Latin America (guarapo), Brazil (caldo de cana or garapa), Egypt and the Levant (qasab). In Brazil, they also use the juice to distil the clear schnapps cachaça, which is the basis for the Caipirinha cocktail. In Columbia, sugar cane juice is mixed with aniseed and distilled to make aguardiente. And in Paraguay, fermented sugar cane juice and caramel syrup is fermented into caña.

Rum is also made from sugar cane: this is called rhum agricole, although this is usually not made from the juice but from the molasses, a thick, dark-brown syrup, which is formed as a by-product in sugar production. Molasses, sugar cane juice and water are fermented, resulting in a sugar wine with an alcohol content of 4 to 5 percent. The distillation process results in crystal clear rum, which gets its dark colour and sweet note from years of aging in pre-used casks, such as whisky barrels. To give the appearance of having been aged for longer than was really the case, caramel colour or caramel syrup is sometimes added, making the rum browner than it would naturally be.